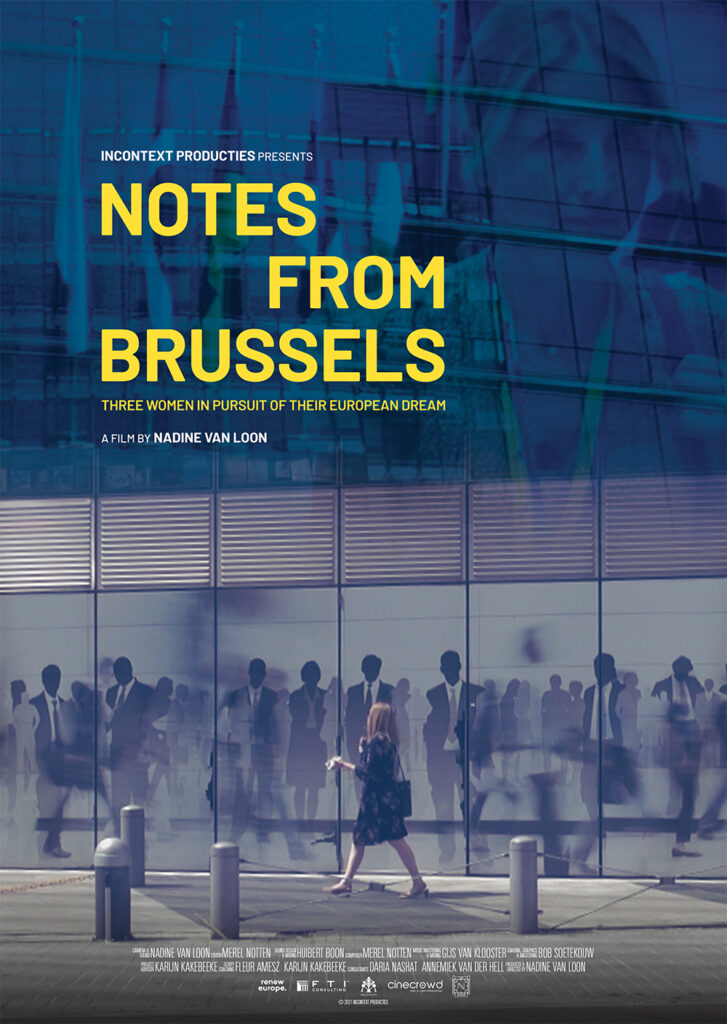 What sacrifices are we willing to make to maintain our trajectory career? What choices would we reconsider in hindsight? Nadine van Loon’s NOTES FROM BRUSSELS follows three women and their drive to keep ahead in Brussels’ fast-paced institutions as they pursue their European dream.

The documentary ‘Notes from Brussels’ follows three women working behind the scenes of European politics; a young French political assistant in the European Parliament, a Polish trade journalist and a German top EU official. Just like the film’s director and narrator the women moved to Brussels at the onset of their careers longing to contribute to Europe. But where the director left this setting after a burnout, these women stayed.

Filmed between 2017 and 2021 we experience how time in the Brussels bubble impacts the women’s lives. As they internalize a European mindset and adapt to the intense work-rhythm we wonder: to what extent can the women heed their inner voice calling them to slow down and to not estrange from their roots? Along the way the director realizes how she herself has become an outsider to this world she once belonged to. Now back living in Brussels with her family she recognizes elements in the women’s struggles that in her case triggered a burnout. What is the price of her choice to leave this work setting and the main characters’ choice to stay? How to embrace reality as it unfolds?

The women’s stories are set against the background of rising Euroscepticism in France; Poland drifting away from the European ideals and the lingering EU migration crisis. As a result the documentary also reminds us how our European values are threatened by the rise of authoritarianism and how fragile European cooperation sometimes is.

A presskit of the film and trailer become available soon.

For a teaser & more background information on the story, cast and crew: visit the crowdfunding page on Cinecrowd.

documentaire over vrouwen in EU instellingen in de maak in Bruzz

Nadine van Loon (Dutch, 46) holds a Masters degree in Contemporary History. She was a political assistant to a Dutch MEP in the European Parliament, then joined the Dutch Foreign Service where she mainly worked in EU-related positions. Along the way she increasingly followed her urge to explore through storytelling how the spirit of our times impacts people’s life choices. Between 2006 and 2009, during a sabbatical leave, she lived in Morocco as a journalist writing for Dutch newspapers and magazines. Back in the Netherlands she decided to leave the Foreign Service in 2012. As a filmmaker, she made several short films for museum exhibitions. ‘Notes from Brussels’ is her documentary debut.

In 2016 I moved back again to Brussels with my family. Strolling along the EU institutions memories popped up of earlier versions of myself; a young political assistant in the European Parliament; then a Dutch diplomat who regularly travelled to Brussels for EU meetings. As I reconnected again with friends from my ‘first round’ in Brussels and met new people, I loved their open mindset and European perspective. To me this means curiosity for each other and an acceptance that we are all molded by our own backgrounds; that we need to listen to one another in order to find a common path. In an almost melancholic way ‘Europe’ got hold of me again and it is from that feeling that this film sprung.

I got fascinated by all these women I saw working in and around the EU institutions. I sensed the meaning they found in their careers and wondered; how do they do it? How to they continue pursuing this European dream that brought them to Brussels? As I was filming my main characters, subconsciously I was examining whether I myself made the right choice to leave this work-environment behind me, whilst at the same time being well aware why I left.

By interweaving three intimate portraits of women in different phases of their life I hope to highlight what women have achieved so far at the workplace. And I want to explore what the accompanying inner struggles tell us about the ‘EU bubble’ and more broadly our societies. By showing viewers how this addictive European reality absorbs the women, the film raises the question whether the women choose their intense work-routine or whether this work-routine imposes itself. Thereby I hope to spark a conversation about the toll that long working hours and stress can take in our fast-paced lives.

We often hear complaints about the EU bureaucracy and its ‘technocrats’. Through my film I want to show the human face behind ‘Brussels’ while triggering reflections on the future of work from a female perspective. As we transition to post-lockdown ‘hybrid working’ my film can create a platform for oft-avoided conversations about what we need as humans for our wellbeing at work.

Interested in a private screening of the film within your organization, to trigger reflections about Europe and the future of work from a female perspective?  This will become possible after the film’s official release. For inquiries: info@incontextproducties.nl.